Ever wondered why you get multiple alerts in a day or why they’re sometimes delayed? Here’s why. 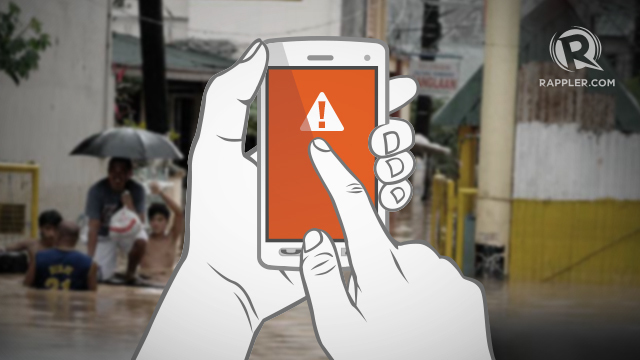 MANILA, Philippines – Every year, around 20 tropical cyclones visit the country, on top of rains from the southwest monsoon or hanging habagat, as well as thunderstorms that are all too common during the rainy season.

The National Disaster Risk Reduction and Management Council (NDRRMC) wants citizens to be informed about what to expect and what they must do during disasters, that’s why it issues emergency mobile alerts.

The NDRRMC and telecommunications companies are required by law to send free mobile alerts before disasters happen. This is mandated under Republic Act No. 10639 or the Free Mobile Disaster Alerts Act.

NDRRMC 24/7 Operations Center Officer-in-Charge (OIC) Aimee Menguilla said in an interview with Rappler, “These alerts, if you already know your area, you know the characteristics of where you live, this EAWM (emergency alert and warning message) is just a reminder to the people of what you’re supposed to do.”

How it works: As soon as the Philippine Atmospheric, Geophysical and Astronomical Services Administration (PAGASA) issues an advisory, the NDRRMC drafts a message to send to telcos, who in turn sends this to their customers.

If you’re wondering why you receive multiple messages in a day, here’s why. For rainfall warnings, the NDRRMC sends separate mobile alerts for PAGASA’s orange and red warnings. (READ: How to use PAGASA’s color-coded rainfall advisory)

On the other hand, a red rainfall warning means torrential rainfall has been observed for an hour and is expected to continue for the next two hours. 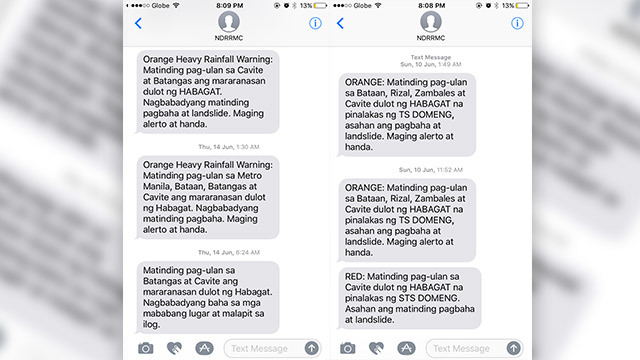 Menguilla also said emergency warnings may be based on advisories of the Philippine Institute of Volcanology and Seismology (Phivolcs) on earthquakes and volcanic activity.

It takes up to 10 minutes to draft an alert message and send it to telcos.

The NTC targets the implementation of the Implementing Rules and Regulations (IRR) by the third week of April. What do you think should be added to the IRR?

‘Why are we making laws and then abandoning their implementation?’ Senator Grace Poe asks

“We translate it into those short messages so the description of the message is hazard-specific, area-focused, and time-bound,” Menguilla said.

Delay problems: Citizens have reported receiving delayed warnings. For instance, a mobile alert received at 9:17 pm was for a PAGASA rainfall warning issued at 4 pm. That’s a delay of more than 5 hours, and by that time, a new warning would’ve been issued already.

What causes this? It’s largely due to the limitations of mobile devices and messaging systems, the NDRRMC said.

CBS is faster because it can send messages to cellphones based on subscribers’ location, to pre-arranged cell sites. It also enables location-specific alerts without the need to register cellphones. 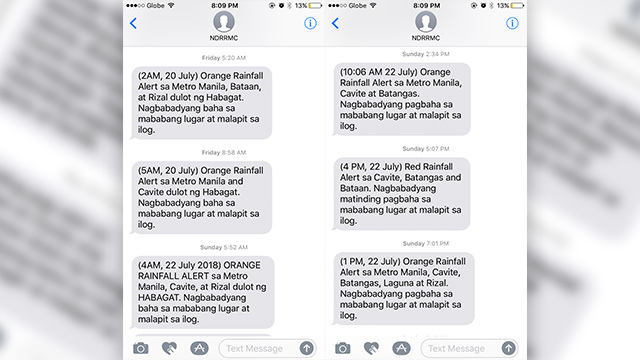 DELAYED. At times, alerts are received hours after they are issued, leaving citizens with delayed emergency warnings.

Unfortunately, not all mobile phones are equipped with this feature.

“We are implementing both types of systems. Siyempre, bawat system, merong limitation ‘yung technology (Of course, both systems have limitations in their technology),” Ofrecio said.

He added in Filipino: “CBS is used in other countries. It’s instantaneous because recipients can receive alerts within 3 to 5 seconds after telcos send them. However, we cannot fully implement this as not all handsets are compliant with the cell broadcast feature.”

Given this limitation, the NDRRMC and telcos resort to SMS to send alerts, which takes much more time as messages are sent “point-to-point” unlike CBS’ “point-to-multiple-point” system.

Ofrecio explained in Filipino: “What happens is, if the NDRRMC sends a red rainfall warning alert to Bulacan, and in that area, there are two million subscribers for example, there will be two million seconds of queuing time because it is point-to-point.”

If you’re one of those who received warnings hours after they were issued, Ofrecio said chances are those warnings were sent via SMS rather than through CBS.

Moving forward: Unfortunately, there are no quick fixes to delayed warnings at the moment, since not all phones are CBS-compliant.

It could also be the case that CBS is turned off by default in mobile phone settings.

Telcos earlier clarified that some older phones, even those made more than 15 years ago, are capable of receiving cell broadcast messages. But this feature could be turned off by default.

Ofrecio also urged the public to check if emergency alerts are enabled in their mobile phone settings.

For Android users, you can go to messaging settings and look for Emergency Alerts or Cell Broadcast. For iOS users, update to the latest version of the operating system, go to Settings, then Notifications, and scroll down to turn on Emergency Alerts.

If you’re annoyed by the alerts, you can always turn them off. But be aware that doing so carries with it great risks too. – Rappler.com